Clean Power Success Stories: Making a Difference at Any Age… a Look Into Youth Activism 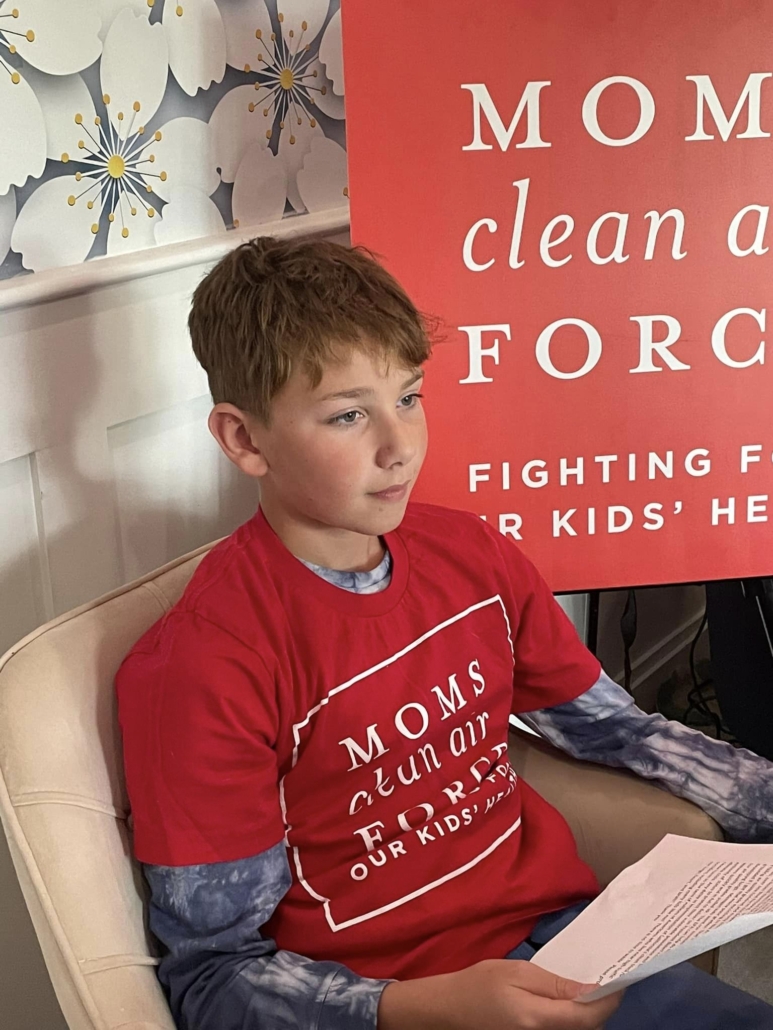 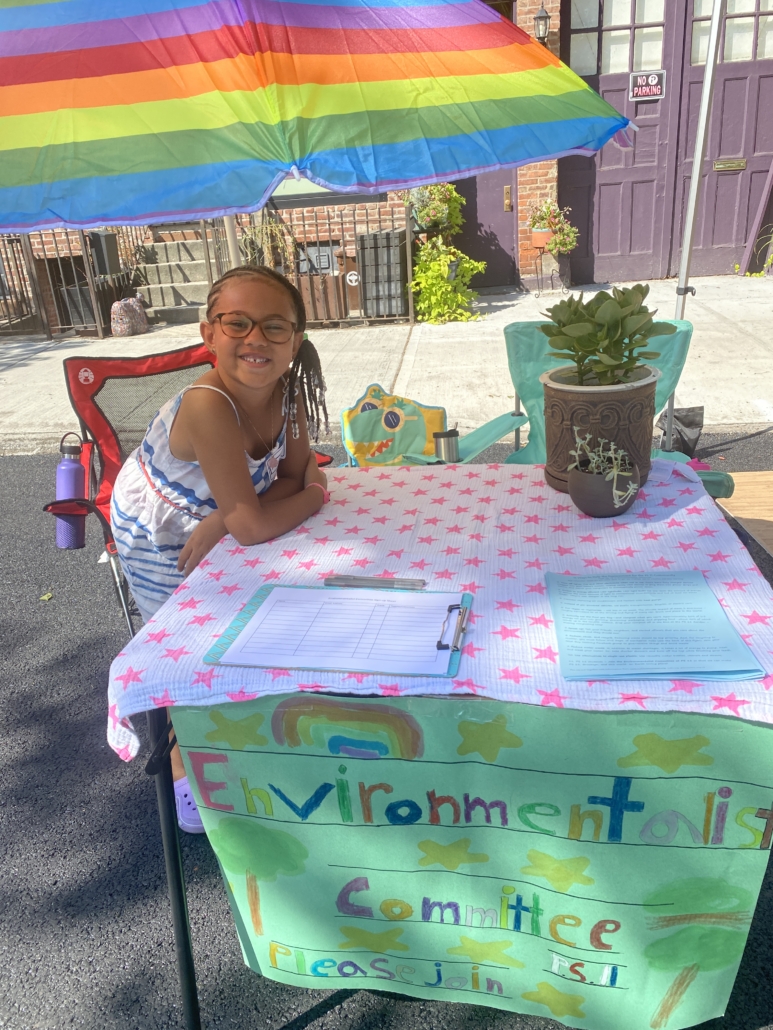 In recent years youth climate activists have brought new attention to the climate movement. Greta Thunberg, who has become a household name, started gaining global recognition at age 15, when she began spending her Fridays outside the Swedish Parliament calling for stronger action on climate change. While Greta has found ways to engage people never before plugged into this work NYCP wanted to raise awareness about how kids of all ages, even those in Elementary and Middle School are making strides in the environmental movement.

We first met with Anayah, a six-year-old student from Brooklyn, NY. Anayah started an Environmentalist Committee at her elementary school when she was in first grade, bringing together students who wanted to help clean up their environment. We recently spoke with Anayah and her mother, Leah, and learned about Anaya’s experiences starting a club at such a young age and their advice for other environmentally-conscious kids and caregivers.

Anayah always felt strongly about helping the Earth but became increasingly frustrated at the lack of recycling bins and amount of litter in her neighborhood. One day after eating out with her mother, she felt inspired to act. She went straight to the top and wrote a letter to President Biden about her concerns. When President Biden wrote back, Anayah was excited to share the news with her first grade teacher and her school’s principal, Abidemi Hope, at PS 11 in Brooklyn. Principal Hope has been a driving force in getting the committee up and running, starting with having Anayah read the letter over the loudspeaker to her whole school. Hearing the letter sparked enthusiasm schoolwide as students reached out wanting to know how they could get involved. 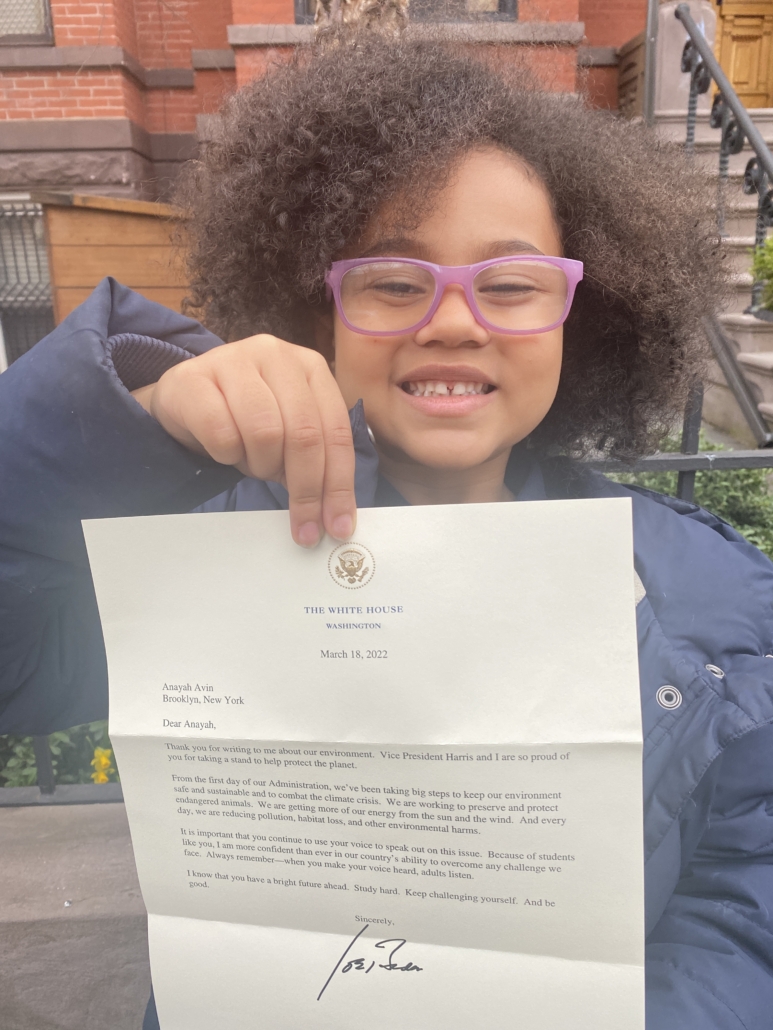 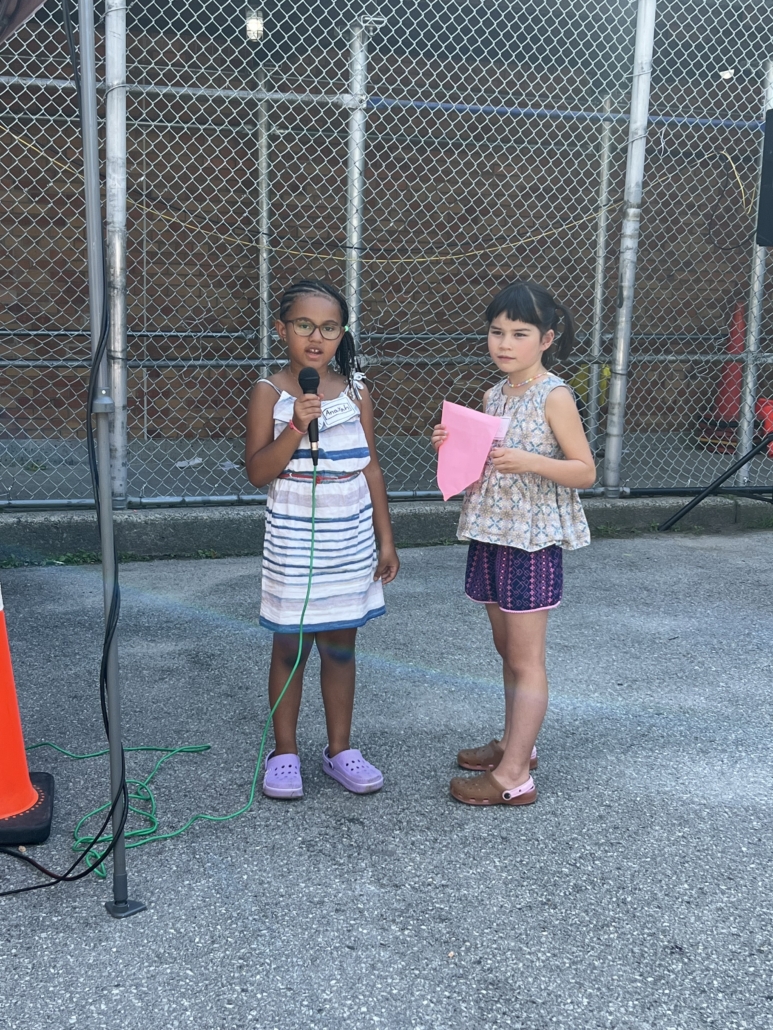 Keeping up the momentum from the letter and with the support of her teachers and principal, Anayah formed an Environmentalist Committee with members from each first grade class. Their first goal was educating other students about the environment and how they can work to protect it, so they gave a presentation to each pre-K class last year. Next, they began working with the Wellness Council, a parent group, to help with the implementation of compost bins in the cafeteria, using the resulting compost soil for a school garden. The school recently began their lunchtime composting program and Anayah and the rest of the committee are excited to educate their fellow students on how to properly compost and reduce waste.

At just six-years-old Anayah has already learned about the joys and challenges of organizing within the climate movement. Her biggest challenge is keeping her committee engaged and on topic, especially since they meet during recess. Over our zoom meeting, she was excited to share one of her favorite books called, “Purrmaids: Quest for Clean Water” that her principal gave each member of the committee a copy of, as a way to help keep building their environmental awareness. The book features cat and unicorn mermaids that need the readers’ help cleaning up garbage from the ocean, educating about pollution, conservation, and the importance of recycling.

Anayah is excited to see the movement grow beyond her school, and recently, a friend who attends a different school has been inspired to start their own environmental group and is reaching out for help.

Zooming out of New York, we then spoke to Oscar, an eleven-year-old student from Livingston County, Michigan, and his mother, Elizabeth. Oscar has been introduced to the climate movement from a young age through his mother’s work with Moms Clean Air Force.

Elizabeth was first involved in the organization working to improve air quality, as a volunteer and now as the state coordinator of Michigan. Her niece suffers from asthma and while she first learned about the complications from the perspective of an aunt, soon after she learned about it through the lens of a mother when Oscar was diagnosed with asthma; a condition worsened by air pollution. 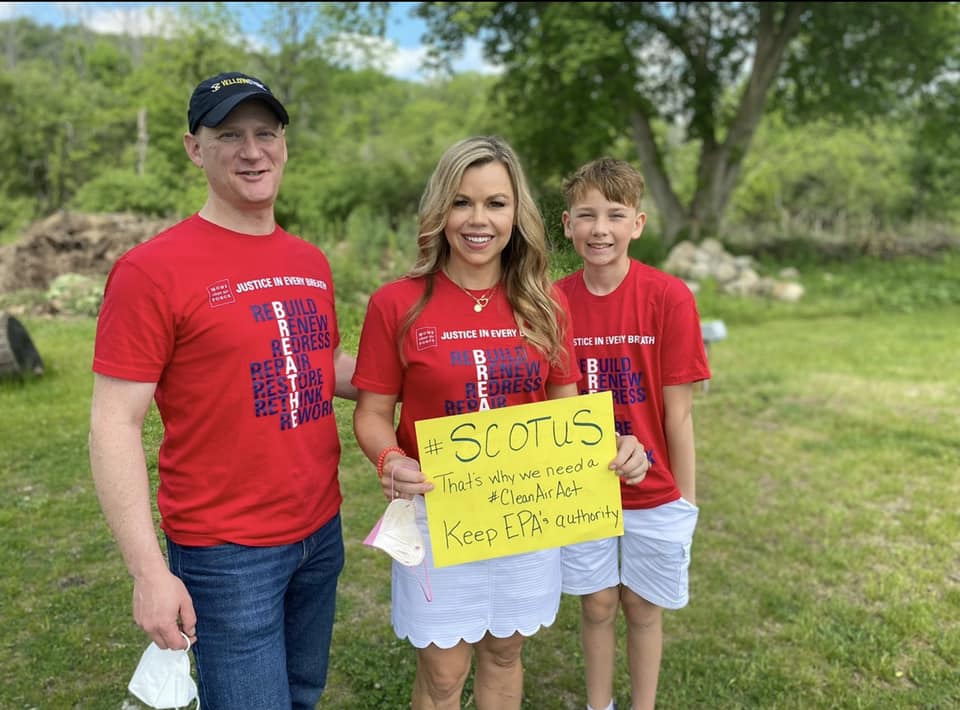 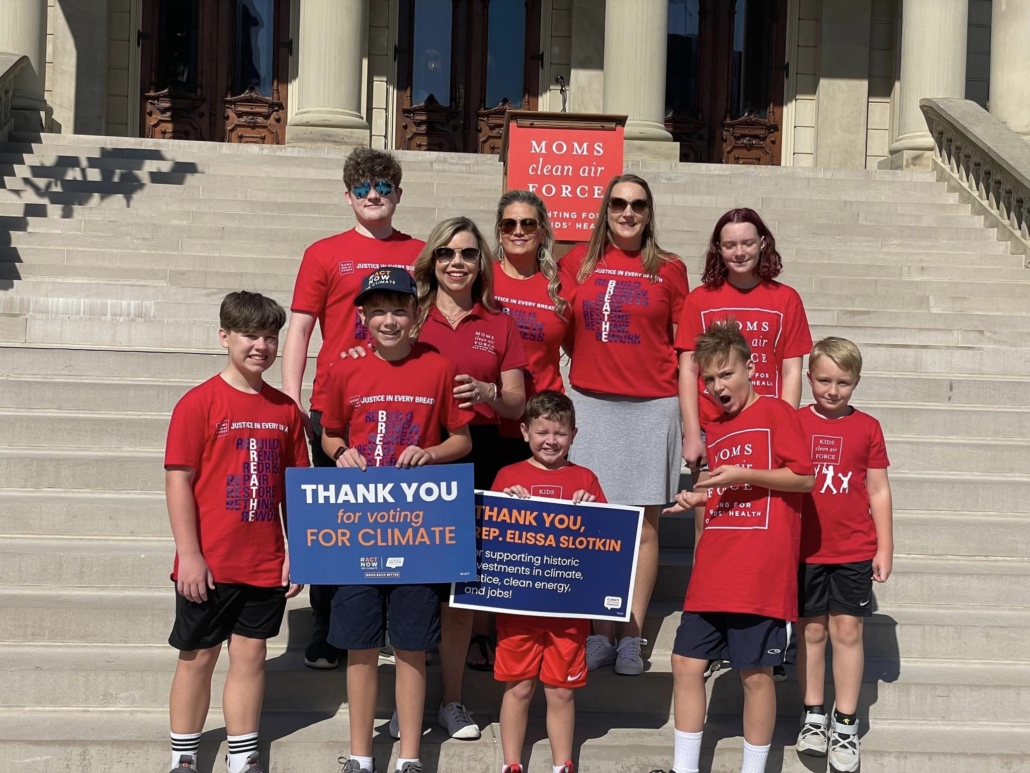 Oscar began accompanying his mother to regulatory and public comment hearings as a toddler but started actively participating when he was only eight-years-old. Watching his mother’s passion over the years inspired him to start testifying, sharing his own stories and advocating for himself and his peers.

Oscar has spoken at several EPA hearings, most recently at the Advanced Clean Trucks (ACT) Regulation hearing this past summer. Even though he gets nervous being the youngest presenter and speaking to high-level officials, Oscar knows the issue of clean air is important. In his testimony, Oscar shared how poor air quality not only affects his health but also his ability to play sports and be active outside because of his proximity to freeways polluted with smog. He urged the EPA panel to issue waivers in California to reduce carbon emissions and protect the health of all people, especially vulnerable populations.

Oscar often feels the impact of air pollution more than others because of his asthma but he continuously expresses that clean air is an issue for everyone. He told us that his classmates regularly complain about the smell on their school buses and often feel sick from being on them for too long, even those without respiratory conditions.

Doing his part to fight to keep his classmates safe, especially living near Detroit where 16% of adults and over 14% of children have asthma, is a mission of Oscars.¹ Aside from testifying at hearings and working with Moms Clean Air Force, Oscar’s teachers have invited him to lead discussions about clean air and health and have him talk about his asthma. He has also done presentations about climate change at school.

While Anayah and Oscar are focused on different areas of the climate movement and participate in their own ways, they both expressed how important it is for other kids to get involved and how easy it can be to take action. Both kids reminded us that being a climate activist can start small, with picking up trash or being more conscious about energy usage, but that’s not all kids are capable of. Anayah’s idea for the committee has grown into additional programs at her school and Oscar’s testimony was given real-time feedback from the EPA panel, which shows how much of an impact kids can have.

When speaking to the parents of the young climate activists, they both emphasized how proud they are to see their children’s efforts in the movement and expressed the importance of encouraging kids to follow the climate action opportunities they are passionate about, no matter their age. Kids are capable of learning about and understanding climate change when given the opportunity.

Whether or not climate change information is in their curriculum, parents, caregivers, and educators can help introduce children to a range of climate topics and may find kids naturally have their own ideas for solving environmental problems. For Oscar, clean air was a natural starting point for activism and Anayah has been able to pick what issues she finds interesting for the committee with the help of the adults in her life.

The opportunity to participate in activism has been helpful for both kids in ways that might not be expected. For Oscar, sharing his experience with asthma and air pollution has been an empowering way to take control and use a health issue that can cause fear as a strength. Elizabeth explained that having the information and opportunity to share from his point of view reduces Oscar’s anxiety about his environment’s poor air quality and his health. Leah shared that she uses her daughter’s work on the Environmentalist Committee to remind Anayah that she has a powerful voice and can do something about the problems she sees in the world. 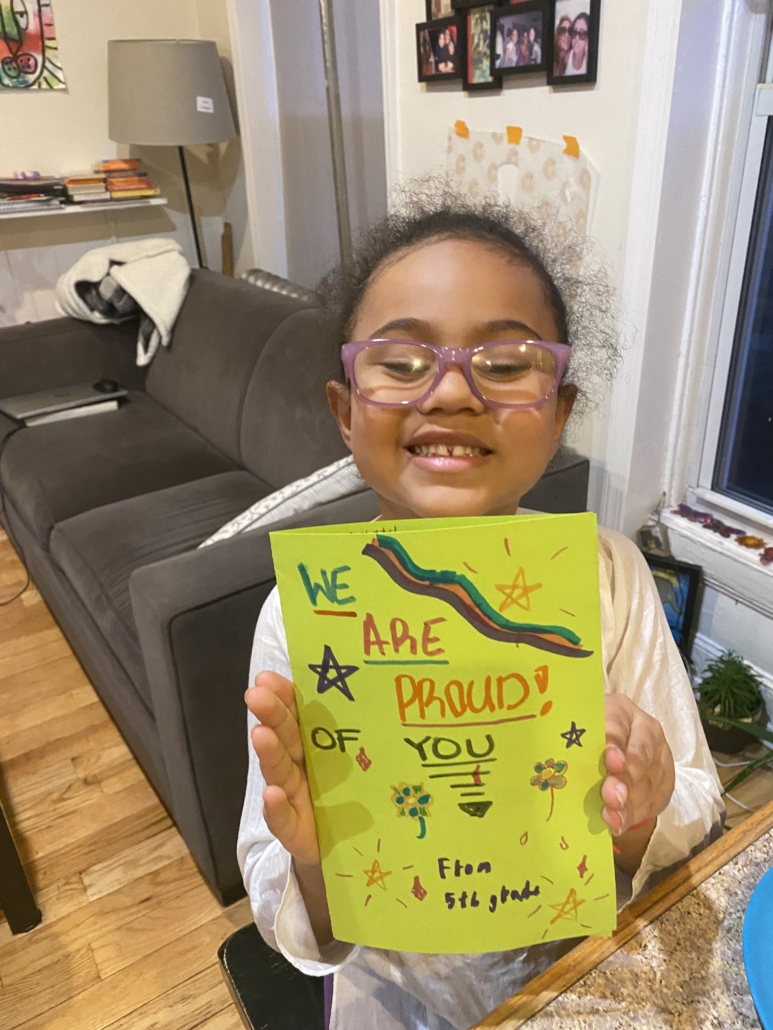 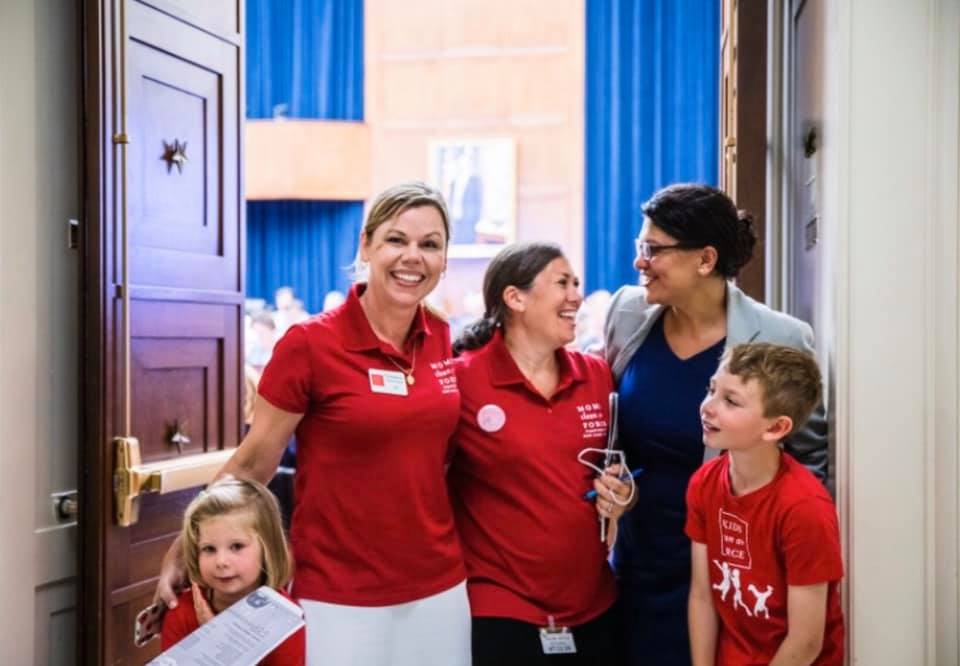 It can be daunting for kids to take action on climate change but helping protect the environment and promoting clean energy does not need to be overly complicated. A great way to start is by learning and getting together with other people in your community. After learning about these students, we hope you see that anyone can be a climate activist. Even kids who are not yet old enough to vote can play a key role in advancing solutions to address climate change and protect our health.

Looking for more ways for kids and teens to get involved with the climate movement? Check NYCP’s new “Youth Power for Clean Power” webpage for educational resources, other youth-led groups, and more! If you have other resources or opportunities for youth across New York State please contact us at info@nyforcleanpower.org.