Expanding wind power, both land-based and offshore, is essential to meeting New York’s clean energy goals. If we are to achieve CLCPA’s 70% renewable electricity by 2030 and play a leading role in addressing the climate crisis, we must accelerate the development of wind farms in our state.

New Yorkers for Clean Power is excited to work with Friends of Upstate New York Wind to support the growth of responsibly-sited wind power projects in New York State by providing accurate information regarding the benefits of wind power: energy diversity and security, construction jobs that pay prevailing wage and provide family-sustaining wages and benefits for communities, tax revenue and economic development, and public health.

Stay tuned for Building Our Clean Energy Future: A Toolkit for Supporting Wind and Solar Projects that we co-created with The Nature Conservancy to help community members actively support renewable energy projects proposed in their towns.

If you support a wind or solar project in NYS, tell us about it on this form, and be the first to receive our Building Our Clean Energy Future toolkit!

Western and Central New York are prime regions for a flourishing wind industry. Wind turbines can’t be placed too close to each other, but where space allows–as it does in this area–the land in between can be used for other things. 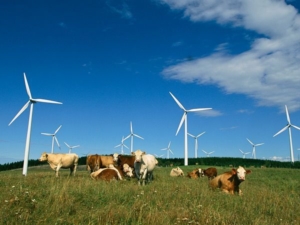 With their many farms and abundant wind resources, Western and Central New York would benefit from installing
wind turbines by enabling farmers to generate additional income while not sacrificing prime agricultural land. Land-based wind projects also create local jobs, as well as funding for the community through PILOTs (payment in lieu of taxes) and other community benefits agreements. 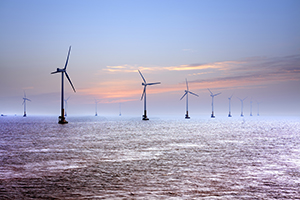 NYCP’s allies at the NY Offshore Wind Alliance helped win a major victory with Governor Cuomo’s announcement committing New York State to 2400 megawatts of offshore wind power by 2030 and the largest combined solicitations for renewable energy ever issued in the U.S. including another Offshore Wind Solicitation up to 2,500 megawatts of renewable energy and a complementary multi-port infrastructure investment, totaling more than $400 million.

Learn about the new siting regulations for large-scale wind & solar released by the Office of Renewable Energy Siting (ORES) from our online teach-in! More teach-in resources can be found here. 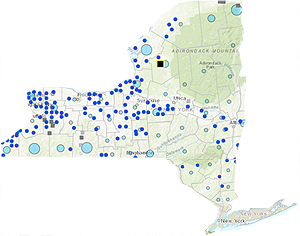 View the Interactive Wind Energy Map for a visual reference of all wind projects that are current in New York State.